I scored a Trail-a-bike for next-to-nothing at a yard sale a few weeks ago. I don’t have any kids, but now I at least have an excuse to have some. In the mean while, I have a niece and a couple of nephews who are the right size to go on bike adventures with this thing. 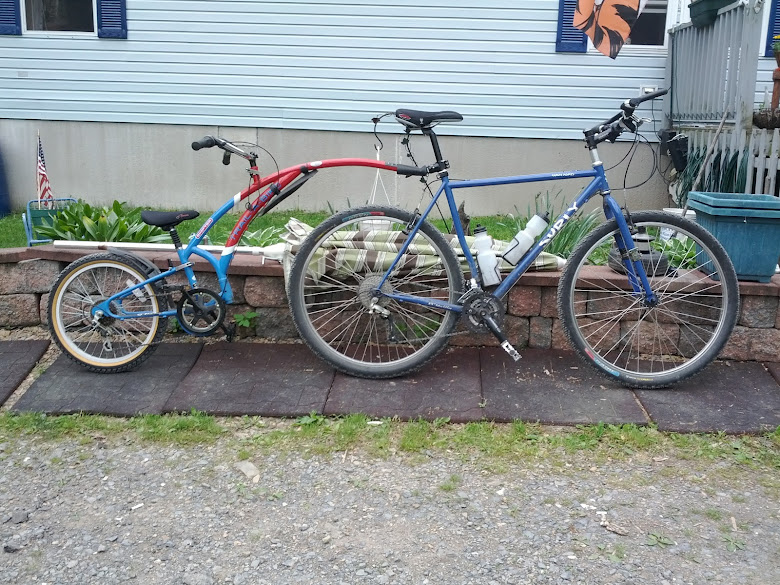 The trail-a-bike web site says that the kids should be able to ride without training wheels before you let them ride it. Bollocks to that. None of the kids are very good without training wheels, but I have really wide bars on the Karate Monkey, and thus far, I have been able to counter their incessant wobbling without getting thrown into the ditch.

The kids seem to like it. They like to either sing silly songs or tell you crazy stories when you’re out riding around.

Yesterday, while trail-a-biking around the block, my nephew (age 4) told me this:

Nephew: Uncle Adam, I’m not afraid of spiders anymore.
Me: How come?
Nephew: Because Spider-Man got bit by a spider, and he has super powers! (I had just given him a Spider-Man bike helmet)
Me: That’s right!
Nephew: Spider-man is a good guy, right?
Me: Yep.
Nephew: And he fights the bad guys, right?
Me: Yep.
Nephew: I wish Spider-man was real. Then I would never be afraid of anything ever again!

I’m not sure the Karate Monkey is the best bike for this. The chainstays are short, and when a kid goes wobbly, it really makes the bike lurch. The wide handlebars make it pretty easy to yank the bike back upright, though. Maybe once the kids learn better balance, I could tow them with the Cross-Check. Then we can haul serious ass down the bike trail, and get to the Ice Cream store in record time.

The Green Goblin and Doctor Octopus will never catch us!