…When we last saw our hero, he was flat on his back, snoozing peaceably in the forest, wondering how he would ever summon the strength to ride his bicycle all the way back home, over hill and dale…

Morning found me in my tent. When I crawled out to attend to biological necessities, I noticed that my legs were a little sore, but not so bad as I expected after yesterday’s epic battle against the hills.

Maybe today would not be such a disaster after all.

I boiled some water for coffee, and soon the other bike hobos were up and about.

Before there is any breakfast, or any packing up of camping gear, or any conversation, there must be coffee.

I made Starbucks Via (instant) coffee, and it was pretty much OK. Sloth had some sort of drip filter, and made real coffee. I believe the bike hobo was also rocking the Starbucks instant.

I had a ton of cardio to do today, so I threw gastrointestinal caution to the wind, and ate two whole packets of instant oatmeal for breakfast. Shortly thereafter, someone started cooking bacon, and caused me to reconsider my entire nutritional regimen.

After breakfast, we broke camp, strapped all our junk onto our bicycles and made ready for departure.

We bid a tearful adieu to the bike hobo, and headed back to Harrisburg. Or at least we headed in a northerly direction. We hadn’t actually bothered to chart much of a course.

We looked at the google maps app on our phones, and hoped / guessed, that PA route 94 would give us a direct, flattish way home.

94 turned out to be a fairly major road, with no trees to shade us from the wicked day star. The hills were less traumatic than the ones the day before, but the traffic was horrific. We considered abandoning the road due to traffic, but kept plodding on. I do not recommend riding your bike on PA94, unless you have nerves of steel, and can hold a razor-sharp line. I don’t have any pictures of this part of the ride, because I was too busy trying to hold my line to mess with the camera. It wasn’t a great route, but we survived. We got off 94 somewhere outside of Dillsburg.

It was hot outside. The sun was roasting us alive, and we were almost out of water. We tracked down a gas station, where we refilled our bottles with water, and our bellies with Gatorade and ice cream.

I was starting to crack, but we only had 15 miles to go, and we were almost back to familiar roads. So, we powered on. We stopped for one last rest stop / photo op just outside Mechanicsburg.

We arrived back at our starting point to discover that Mrs. Sloth had locked Mr. Sloth out of the house. I was sympathetic, but I had my own Mrs. waiting for me at home — with food. So, I took my leave. On the drive back to my house I pondered the day’s adventure.

We had made it, and the Man with the Hammer did not totally destroy me like he did the day before. I attribute this to the following factors:

Here’s how I made out:

I came up a little short on the weekly total, but I got the long ride in, so I’m calling it a successful week.

This week’s long ride was another Necronneuring™ adventure. I found another old cemetery in the Google maps satellite view that wasn’t on the map, so I rode out to investigate. Sloth came along on this one.

It was a dark and gloomy day. Perfect for a spooky bike ride.

Sloth knew a shortcut through the woods to avoid a particularly shitty intersection.

After a great deal of dick-monkeying around, we got to the entrance to the cemetery. Unfortunately, the road was gated, and posted with “No Trespassing” signs.

A caretaker showed up out of nowhere and opened the gate for us. It was kind of strange. This gate is in the woods, out of sight from anywhere. I’m assuming he was real, and this isn’t some Scooby-Doo ghost story thing, because Sloth saw him too.

Anyways, we made our way up to the grave yard and looked around.

After a few minutes of walking around in wet grass, and breathing in the unwholesome vapours of the graveyard, we rode back down the mountain. Sloth brewed up some coffee to keep our spirits up.

After coffee time, we rode back across the river to the land of the living.

I had some minor mechanical malfunctions on this ride. I lost a fender mount, and seem to have picked up a few ticks, squeeks, and moans in the Cross Check. I have about 1600 miles on her since her last tune-up, so I guess it’s time to get the wrenches out and give her the once-over.

These rides are getting longer, and I really don’t want to have a total breakdown 30 miles from home.

The Sloth and I did our annual fall s24o this past weekend (fourth year in a row!). Somehow, we managed to pick the coldest night of the year for our camp out. It was the first time I’d been on a bike in two months. Hauling camping gear around the mountains after a long time off the bike is probably not a good idea, and my legs were shot shortly after we started.

We stopped by this covered bridge to take a picture or two. 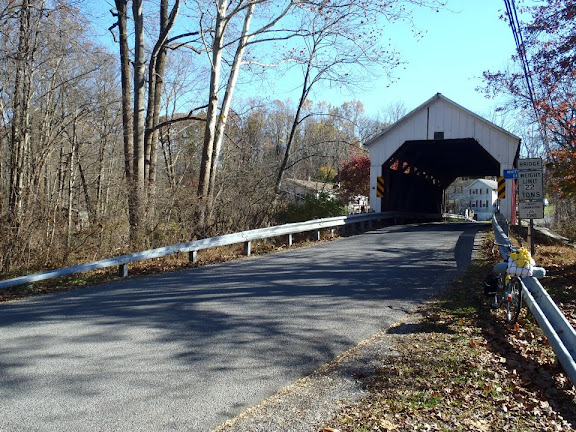 A couple of miles later, we crossed into the State Forest. 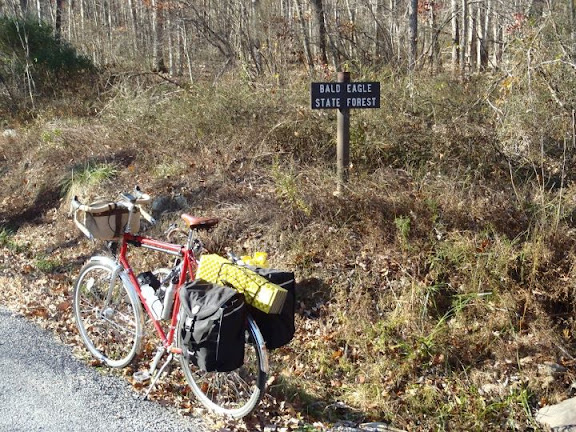 We had a big mountain to climb to get to our campsite, but it was starting to get dark. We wanted enough daylight to gather a big pile of firewood, since the forecast was for cold, cold, and more cold. I wasn’t sure we’d make it to the site before dark, so we started to look for any good site we could find. 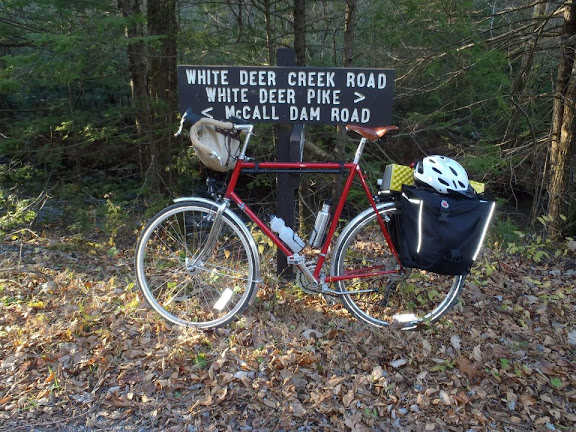 We couldn’t find anything suitable on the north side of the mountain, so we climbed (haha, we walked) over the mountain, and rode down to our site, just as the sun started to go down. 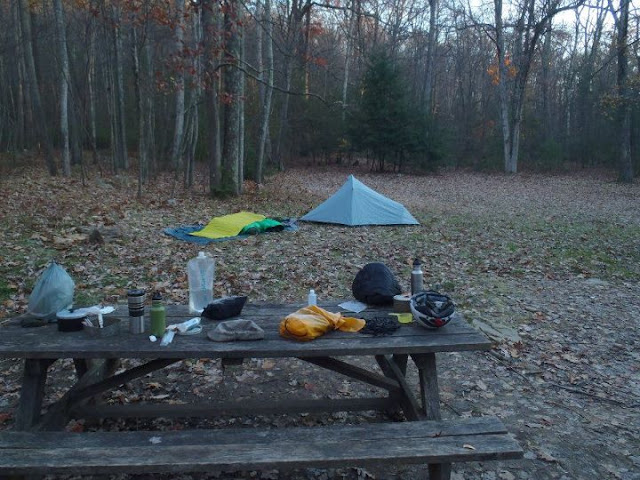 When we got to the site, we discovered that the forest spirits had blessed us with a big pile of firewood, left by some previous campers. The only downside was that the wood was soaking wet from the recent monsoons and freak snow storm.

It took a long time and an Esbit tablet, but we got a fire going. 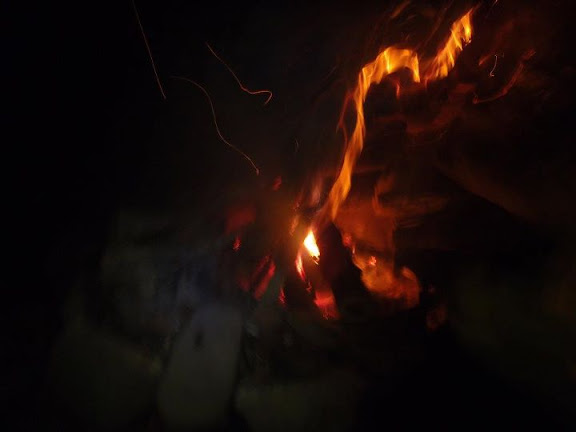 Good thing, too. It was miserably cold. The forecast was calling for 26 degrees, but I call bullshit. I didn’t have a thermometer, but it was cold. Cold enough for stream to come off your pee. And that’s cold.

I experimented with cooking and making hot cocoa with an alcohol stove. Alcohol kind of sucks in the cold, but I eventually had a hot dinner and a big hot mug of hot chocolate. I later figured out that you need to keep the alcohol in your pocket so it stays warm.

We had the traditional bullshitting session around the campfire until it was so cold we couldn’t stand it anymore, and so we went to bed.

With the early bedtime and daylight savings time nonsense, I was awake by 4:30 the next morning. I got up and made a pot of coffee. After I finished my coffee, I got cold again, and got back in my bivy. I laid in my bivy, looking at the stars for about an hour. I saw 4 shooting stars, and thought that it was pretty nice not to be in a tent, even though my bivy and Thermarest were glazed over with a nice heavy coating of frost. 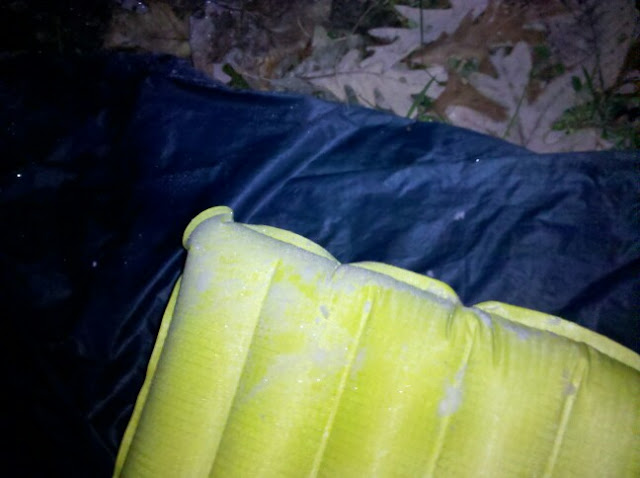 Sloth got out of his tent to go pee, and said it was cold. He went back to bed, and declared that he wasn’t coming out until the sun was out to warm thing up. I stayed in my bivy and kept on looking at the stars until the stars went away and the sky turned blue. 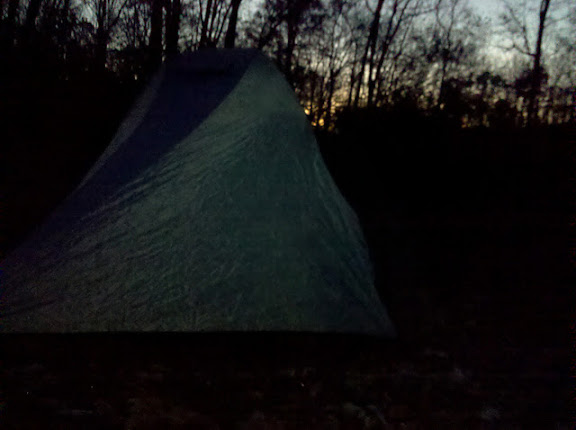 I decided to go have some breakfast, but my cliff bar was frozen solid. So, I made a second pot of coffee, and dunked it in the coffee to thaw it out. This actually turned out to taste wonderful, and I think I’ll keep dunking my cliff bars in coffee even when they’re not frozen from here on out.

At long last, the sun came up over the mountain, and actually started to warm things up. Sloth got out of bed to make some oatmeal, while I wandered off into the woods to dig a cat hole (this is a wild campsite without facilities). 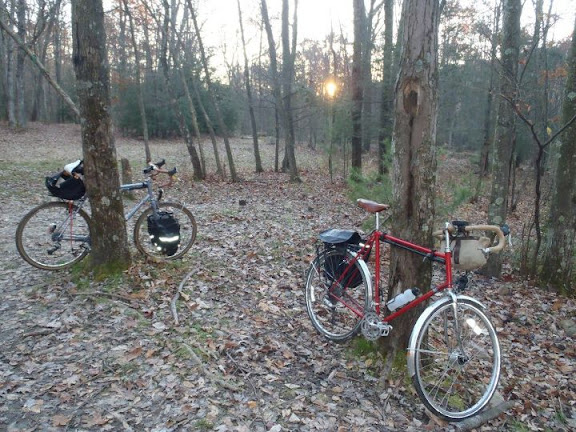 We broke camp, loaded the bikes, and were on our way and rolling down the mountain. It was a nice long descent. I was flying down a gravelly road on over-inflated 35mm tires, and I think my brains almost got rattled out of my head.

When we made it to the bottom of the mountain, I looked down at my handlebar-mounted GPS to see how fast we were going.

GPS was no longer there! Must have rattled loose on the way down the mountain.
My legs were already beyond fried at this point, and there was no way in hell I was riding back up the mountain to look for it. I honestly would have been lucky to make it back to the car (which was less than 10 miles away). So, I had to radio for a rescue.

Klinutus and Evil sister came and picked us up, found the lost GPS, and shuttled us and our bikes back to the starting line.

Instead of the 20 miles we had planned for day two, we rode about 7, and then ate gigantic cheeseburgers.

As we exited the cheeseburger establishment, we saw a young lady eyeballing our bikes. She said her dad was a frame builder in Philly, and that she liked touring bikes because most people ride hybrids.

Sloth and I are reasonably convinced that this mystery woman’s father is Bilenky, but neither of us had the presence of mind to ask, and didn’t want to come across as strange frame builder groupies. She was impressed to learn that we camped out, and told us the official temp was around 24 degrees that night.

I think this makes the coldest night I’ve ever slept without a tent or mummy bag.

For those of you curious about gear:
I was under a JRB Mt. Rogers quilt on a Therm-a-rest neoair, inside a cabelas XPG bivy.

I was very comfortable with this setup, except for my head, because my hat kept falling off.

This was a fun trip, and we’re even considering doing a second one this year; possibly in the Tuscarora State Forest.

Update:
The Sloth has written up a more entertaining account of our adventure on his site.