My plan was to hike from Cowpens Road to Fenton Knob, and then turn around and hike back to the car.

The trailhead parking on Cowpen’s Road is next to a very nice overlook, so I stopped to take in the scenery.

The hike started on top of the mountain, so the first two miles or so were a gentle downhill to a small stream called Laurel Run. I stopped here to top off my water bottles.

The subsequent climb was ridiculous. Forward progress meant picking my way through a jumble of boulders, straight up the steep face of Sherman’s mountain. Also, the rocks were covered in slippery leaves, so it was one step forward, and half a step sliding backwards. Progress was slow.

Once I made it up on top, the trail followed the ridge line of Sherman’s mountain for a little while. I stopped for a rest near the site of an old fire tower before descending into the next valley.

By the time I arrived in the next valley, I was running low on water. I was disappointed to find a muddy swamp instead of a nice clear mountain stream. The only drinking water was full of frogs and tadpoles. Not a problem; I had my water filter, and so I pumped a fresh liter of swamp water, and stopped for a while to eat trail mix and contemplate the universe.

At this point, I had been walking for several hours and had not seen any other people. It was wonderful.

I didn’t make very much headway with my philosophical musings, so I strapped on my pack and continued hiking. After a quick up-and-down over a smaller ridge, I started the climb up to Fenton Knob.

This climb was almost comical. It was steeper, rockier, and leafier than Sherman’s Mountain. It was ridiculous.

After a great deal of grumbling and stumbling, cursing and complaining, I made it to the top!

Now, all I had to do was turn around, and walk back to my car. This meant descending the steep mountainside that I had just scrambled up, which is even trickier. I fell more than once, and ended up scooting part of the way down on my butt. I’m sure it looked silly, but better to look like a buffoon than to run the risk of turning an ankle in the middle of the woods all by my lonesome.

By the time I scooted my way back down to Laurel Run, I was in dire need of refreshment, so I fired up the ESBIT stove, and made a gigantic pot of coffee. Then I sat next to a little cascade in the stream, drank my coffee, and engaged in additional philosophical introspection.

I made a little video of the scene.

After consuming a large quantity of coffee (and a considerable number of candy bars), my spirits were much improved. I walked the rest of the way back to the car without incident.

Here is a map of my adventure. (I GPS logged the whole thing for the greater glory of OpenStreetMap.)

My recent trip on the AT has re-igniting my interest in hiking. I decided to take advantage of this unexpected gust of motivation, and try to log some miles toward the DCNR State Forest Trails Award.

My plan for the moment is to try to complete as many miles as I can on out-and-back dayhikes. This means walking twice as many miles, but I also get to go whenever I want, without being beholden to anyone else’s scheduling constraints.

In any event, walking alone deep in the woods is good for your spiritual well-being.

So, I drove out to the Tuscarora State Forest, parked the car at the hiker parking lot, and set out to walk to the northern boundary of the State Forest. I stopped off at Flat Rock Vista to take a photo.

I continued my way down through the Wildcat Hollow, where I came upon a little cascade in the stream. I stopped to shoot some video. I discovered that I am a very awkward personality on camera.

You can see from my hat and the lack of foliage, that I am very far behind on my blogging. This hike was about 6 weeks ago.

I continued hiking north until I crossed the boundary of the State Forest.

At this point I had finished the Tuscarora Trail from PA 233 to the edge of the State Forest. I just needed to get back to my car. Not wanting to retrace my steps, I decided to loop back on the red-blazed Warner Trail.

Not far down the Warner, I came upon a swollen creek.

This was a calamity. I didn’t want to walk around the rest of the day with wet feet, but turning around seemed like a cowardly way out. So, I took off my socks, rolled up my pants legs, and forded the stream.

One of the reasons I hike in trail runners instead of hiking boots is that the trail runners are supposed to dry out quickly if you get them wet. I was now in a position to test that theory. I hiked on for about two more miles, then stopped for lunch and gave my shoes some time to dry out.

By the time I had eaten my lunch and was ready to hit the trail again, everything was dry. I put my socks back on and hiked back to the car.

So, That takes care of PA233 to the edge of the State Forest, and I already hiked PA233 to Cowpens road a long time ago. So, I’ll be starting my next hike on Cowpens Road, and heading south.

Long, long ago, I mentioned that I wanted to hike all 798 miles required to earn the State Forest Trails Award.

Last weekend, I went out into the frosty mountains with Klinutus and my evil sister. It was about 16 degrees up in the snowy mountains.

I got to try out my Subaru’s AWD in the snow for the first time. It worked very nicely.

There was a lot of rocks. I hate rocks. Especially when they’re under the snow and you can’t see them. 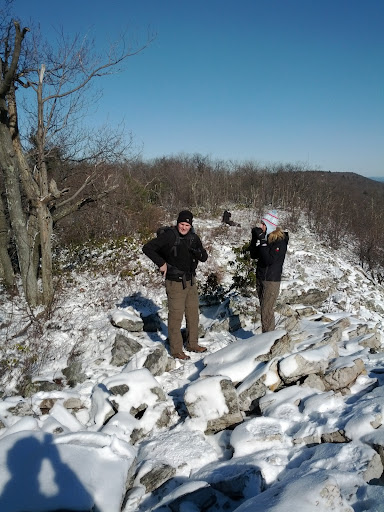 Because I am a very clever boy, I had a thermos full of coffee in my backpack. So, I was fully caffeinated for the hike.

There are a lot of nice views on this section of the trail. Here is Klinutus contemplating endless infinities or whatever.

At any rate, it was very nice, except that I twisted my ankle or something out there, and have been out of commission for the past week.

Klinutus brought along his camera tripod, so we could pose for our end-of-the-hike group photo. 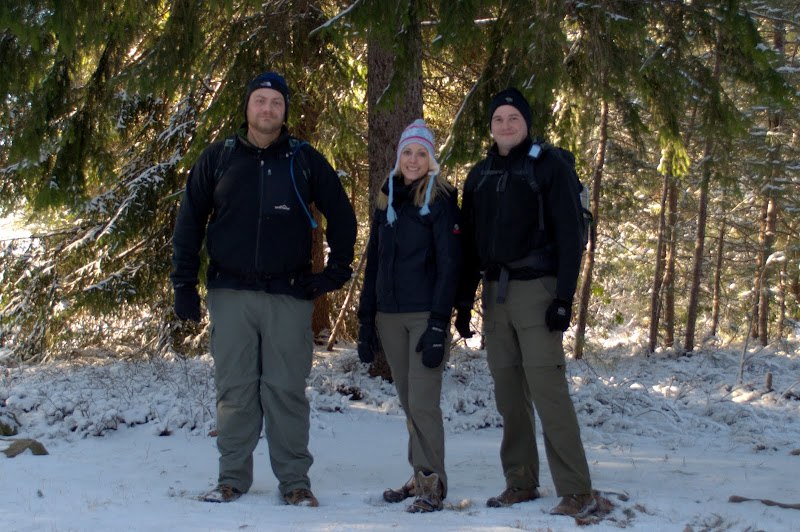 Another four miles down, only 768 left to go!

I set up my new tent in the back yard today, and crawled around in it. It wasn’t too hard to set up. I didn’t really get the rain fly attached very well, so there’s wrinkles and stuff.

Here she is with no rain fly. Other than the floor, the whole thing is mesh, so on a nice night, you can see the stars without getting eaten by bugs. The door is cool, too. It’s only attached at the very top of the teardrop shape, so it doesn’t flop onto the floor when you’re getting in and out. There’s a pocket in the roof to stick the door into if you want to keep it open.

There’s a door on each side so you can get up to go pee in the middle of the night without having to crawl over your tent mate.

Here’s an overhead view from my deck, showing my sloppy pitch of the rain fly.

The moment of truth. I was able to get into it and lie down without my head or feet touching the ends. With a big fluffy winter sleeping bag, I might touch. It was too warm to try it today. Unlike most other tents sold as “2 person” tents, I think I could actually share this with somebody and not end up wanting to kill them in the middle of the night.

There are vents in the top of the rain fly to let out condensation, farts, etc. You can open and close them from the inside, so you don’t have to go out in the rain. That’s pretty nice.

There are little orange tie-out points all along the perimeter. I suppose you could tie it out really well if you were expecting a blizzard or something. I doubt I’d ever use them. The vestibules are fairly small. You could probably fit your shoes and a few odds and ends in them with no problem.

This is first tent I’ve ever owned that wasn’t some piece of shit from Wal-Mart, so I’m probably a little bit more excited about this than a sane person would be. I’m looking over my maps for bike-camping opportunities. I’ll hopefully get a chance to field-test it soon!

This weekend, I once again joined forces with Sophie the Adventure Dog (and the regular cast of human characters) to knock off a couple of miles on the Mid State Trail.

It snowed pretty hard for a while.

Sophie was rewarded for her bravery in the snow with a doggie biscuit.

After hiking the Pinchot Trail Saturday, I spent the very next day on the Tuscarora Trail with Sophie the Wonder Dog, and her Human concierge.

We hiked about 9 miles through icy wind and snow squalls, then we passed a hunting cabin where some classy fellows decorated the trees with women’s undergarments.

Saturday, Apertome and I hiked the north loop of the Pinchot Trail.

We had some wet weather to contend with, which afforded me the opportunity to try out my new poncho.

We had pretty miserable conditions, but the poncho kept me dry, except for my legs, which got thoroughly soaked in an outright downpour near the end of the hike.

I foolishly packed my camera down in the bottom of my pack, so I didn’t get any pictures, but Apertome did.

I’m particularly pleased with the smart fashion statement the poncho makes in the woods. Very “Odhinnic-Wanderer chic,” with just a hint of un-dead superhero.

Fashion aside, it was a very nice hike despite the weather. It put me 10 miles closer to the State Forest Hiking Award. 14 miles down, 784 to go!

Apertome has posted a nice write up of the day on his blog. I don’t think there’s much I could add to his account.

This morning, I donned my spiffiest hiking hat, and began my effort to hike all 798 miles of the State Forest Hiking Trails System.

I hiked the Rocky Knob Trail in the Michaux State Forest.

The trail is a fairly easy 4 mile loop. There’s only one real climb, and you are rewarded for your labor with a nice view.

If you look carefully, you will notice that the leaves are falling here in Pennsylvania.

I took my GPS along, and now the Rocky Knob Trail is in OpenStreetMap.

4 miles down, 794 left to go before I get my ceremonial walking stick.

Did you know that if you hike all 798 miles of State Forest Hiking Trails in Pennsylvania, they give you an award?

Well, they do. You get a certificate, a patch, and a “ceremonial walking stick.”

I would really like to have my very own ceremonial walking stick.

I’d also like to finish walking all of the Appalachian trail in Pennsylvania. All together, it comes out to about a thousand miles of walking.

At the end of this, I will be a grizzled old mountain man.

With a ceremonial walking stick.

You will all, no doubt, be greatly jealous of my grizzled manliness, and of my walking stick. If you ask nicely, I will whack you in the head with it.

My walking stick, that is. Not my grizzled manliness.